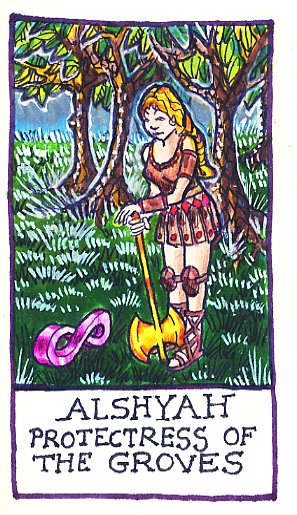 A very long time ago, by what is now the Black Sea of our earth, there lived a civilization
of fierce warrior women. Or it could have been a close alternate earth. I forget.

Anyway, there was a very strong and very powerful warrior among them named
Alshyah Of The Broken Branch.
There is a facinating story about how she got her name,
according to the ways of her people, of course. There always is.

Alshyah lived by the sword and the axe, and her people occasionally
worked for their neighbors as professional mercenaries for the many
and varied city-states of her time.

Many of the women of Alshyah's society had run away from
the city-states, angry at being the property of men, or
angry at being abused, or simply because they wanted to live free.

Occasionally, her people would raid a city for men, which they would use
only for reproduction with, then kill. It was a cruel and violent age.

Alshyah eventually became the leader of her civilization, so great were her
adventures and exploits. But she was put to death by her own
people because she committed the one crime they could
never forgive.

Alshyah spared the life of the captured father of her baby; not because she
wanted him at all, but instead because he played music for her,
music so utterly beautiful and joyful that it made her weep openly.

She could not slay a man who managed to
do such a thing, all while knowing his fate.