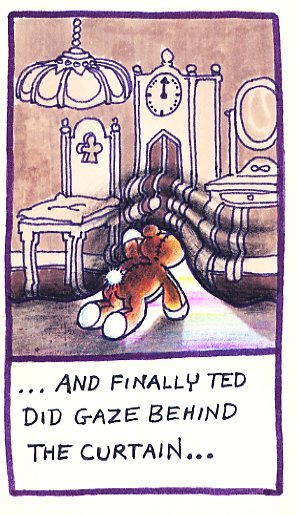 Ted was a magically animated, living toy, a small bear that is self aware,
can move and talk, and who can feel and think and act.

For what seemed like ages, as long as he could remember, he had existed with the
other  living stuffed animals, in the Grey World, where everything is made
of drapery.

He and the other animals often considered the world and their mysterious
existence in it. They had no idea how they came to be, what the Grey World was,
or how they even knew anything at all.

Ted knew these things, but he did not know what any of it really
meant, and he had no idea of anything beyond the Grey World
and his timeless experience with the other stuffed animals.

All the animals were like Ted, and this is why they spent so much
time trying to figure out things like how they could know that
they were a representation of a bear, say, but not
know what a real bear actually was, or even where the
idea and the word came from in the first place.

Sometimes, some of the stuffed animals would claim that they
had heard sounds from beyond the curtains of the world.
They would say that they heard a thump, or a footstep,
or sometimes even a voice.

But later, they would not be sure anymore whether they had actually
heard anything at all. Since such events always happened when
a stuffed animal was alone, or with few others near,
there was no way to prove the claims, despite
many attempts and many efforts to listen very carefully,
in large groups.

Even so, such claims caused much speculation and sometimes
concern.

All of this wore on Ted. The little stuffed bear grew more restless
with every passing timeless day. The Grey World was dull to
Ted, and he found it ever so dreary. But worst of all were the
questions in his mind, about everything, that constantly
plagued him.

Everyone knew that it was dangerous to try to do more
than listen carefully near the curtains. There were rumors and
fears. It was said that it was doom to get too close to the drapery
walls of the world. It was heresy to even speak of moving the drapes apart.
It was pointless in any event, because there was surely
nothing there.

Eventually, Ted could stand it no longer...
...it was all just too much you know...
...and finally Ted did gaze beyond the
curtain...