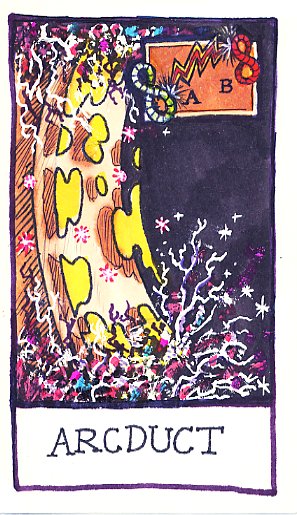 An ARCDUCT is an interuniversal unoplasm fistula.
When two universes of differing metacosmic potential begin to collide, hyperdimensional streamers of fundamental energies, called unoplasm are pulled out of one universe into the other. Like two stars of differing size colliding, the universes pull matter, energy, space, and time in long streams and rivers through hyperspace, as they collide, and ultimately destroy -or merge- with each other. This horrendous phenomena is called an Arcduct, and it is like a river of lava and a hurricane together, flowing through hyperspace, from one cosmos to another, as the two universes gradually collide.  Sometimes two, or more, universes may actually go into a kind of 'hyperspace orbit' around each other, balanced from total collision, but bridged by an Arcduct. It is quite a feat to survive riding such a cosmic river....